Freedom of Religion in Israel 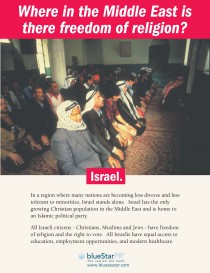 Where in the Middle East is there freedom of religion? Israel. In a region where many nations are becoming less diverse and less tolerant to minorities, Israel stands alone. Israel has the only growing Christian population in the Middle East and is home to an Islamic political party. All Israeli citizens – Christians, Muslims and Jews – have freedom of religion and the right to vote. All Israelis have equal access to education, employment opportunities, and modern healthcare.