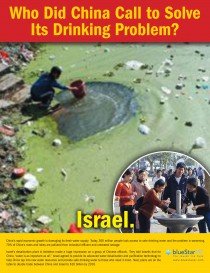 Who Did China Call to Solve Its Drinking Problem? Israel. China\’s rapid economic growth is damaging its fresh water supply. Today, 360 million people lack access to safe drinking water and the problem is worsening. 70% of China’s rivers and lakes are polluted from industrial effluent and untreated sewage. Israel’s desalination plant in Ashkelon made a huge impression on a group of Chinese officials. They told Israelis that for China, “water is as important as oil.” Israel agreed to provide its advanced water desalination and purification technology to help China tap into new water resources and provide safe drinking water to those who need it most. Next, plans are on the table to double trade between China and Israel to $10 billion by 2010.