Don’t Be Fooled by Lies about Palestine – Postcard Back 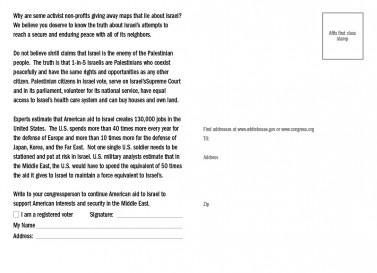 Available in either stand alone poster or as a post card with the following letter to be sent to your Representive on the back.
Why are some activist non-profits giving away maps that lie about Israel? We believe you deserve to know the truth about Israel’s attempts to reach a secure and enduring peace with all of its neighbors.
Do not believe shrill claims that Israel is the enemy of the Palestinian people.    The truth is that 1-in-5 Israelis are Palestinians who coexist peacefully and have the same rights and opportunities as any other citizen. Palestinian citizens in Israel vote, serve on Israel’s Supreme Court and in its parliament, volunteer for its national service, have equal access to Israel’s health care system and can buy houses and own land.
Experts estimate that American aid to Israel creates 130,000 jobs in the United States. The U.S. spends more than 40 times more every year for the defense of Europe and more than 10 times more for the defense of Japan, Korea, and the Far East.    Not one single U.S. soldier needs to be stationed and put at risk in Israel. U.S. military analysts estimate that in the Middle East, the U.S. would have to spend the equivalent of 50 times the aid it gives to Israel to maintain a force equivalent to Israel’s.
Write to your congressperson to continue American aid to Israel to support American interests and security in the Middle East.