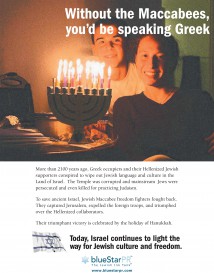 More than 2100 years ago, Greek occupiers and their Hellenized Jewish supporters conspired to wipe out Jewish language and culture in the Land of Israel.
The Temple was corrupted and mainstream Jews were persecuted and even killed for practicing Judaism. To save ancient Israel, Jewish Maccabee freedom fighters fought back. They captured Jerusalem, expelled the foreign troops, and triumphed over the Hellenized collaborators. Their triumphant victory is celebrated by the holiday of Hanukkah.
Today, Israel continues to light the way for Jewish culture and freedom.