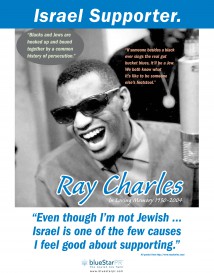 “Modest to the point of mum about his humanitarian and charitable activities, Ray Charles makes an exception for the State of Israel and world Jewry.
Among the many, the world leader Charles has most enjoyed meeting is David Ben-Gurion, with whom he had a conversation of many hours during a concert tour of Israel not long before Ben-Gurion”s death.
And the award among the hundreds he claims to have touched him the most is the Beverly Hills Lodge of B’nai Brith’s tribute to its “Man of the Year” in 1976.”
– from http://raycharles.com/